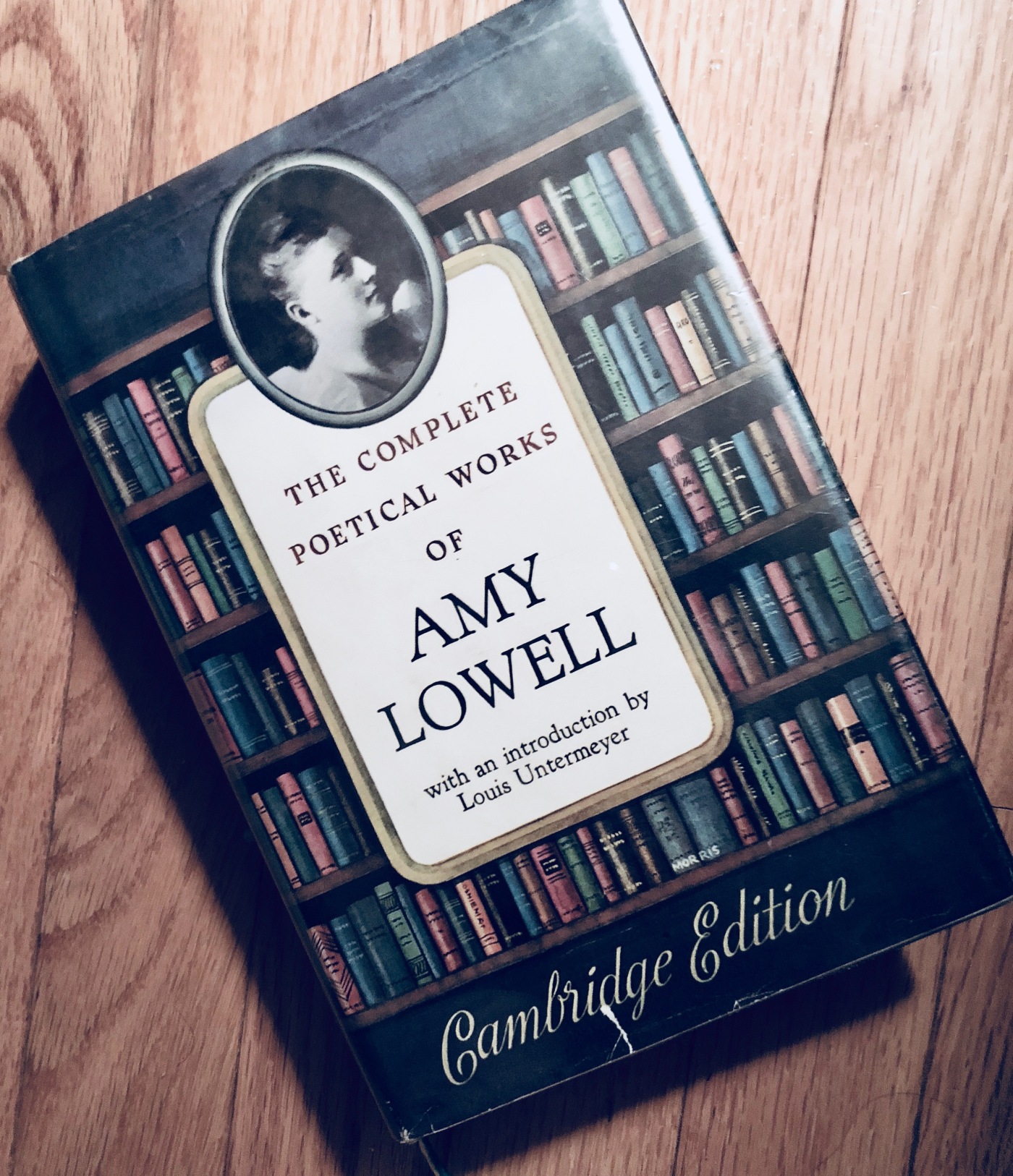 Poetical, no? I can’t take credit for crafting this notion. It’s a found notion.

Some of my favorite places to find books—as a compulsive book collector with limited funds—are thrift stores, rummage sales, and library giveaways. I also tend to leave those events with back-breaking “hauls.” So, I’m not sure exactly where—or when—I acquired my copy of The Complete Poetical Works of Amy Lowell (Houghton Mifflin, 1955), but it’s been banging around my stacks for a little while at least.

Let me tell you a little about Amy Lowell, because she was an incredible badass.Born in 1874 to a well-to-do Massachusetts family, she wasn’t allowed a formal education (on account of: she was a girl); so she rolled up her sleeves and got her one for herself, becoming a ferocious reader and book collector. Amy grew up strong-willed and independent-minded; she flirted with the idea of a career on the stage (scandalous!), smoked cigars, went about with a pack of enormous and intimidating sheepdogs, lived nocturnally, travelled widely, was unfashionably unthin, feuded with Ezra Pound, and spoke her damn mind. In short, she was a scandal and a sensation. She was also, it is fairly certain, a lesbian who had a number of relationships with other women—including living with Ada Dwyer Russell for many years. Though, of course, she and Ada would be referred to as “close friends” and “companions” (the original “gal pals”).

Amy Lowell received a Pulitzer for her poetry after her death in 1925. In her lifetime she published at least 650 poems, and wrote an unknown number more. Sadly (but predictably), she and her work were largely forgotten after her death, and she is only recently being slowly, unevenly “rediscovered” in a process which began a little bit in the 1970s.

But back to Ms. Lowell’s Complete Poetical Works: it’s a weighty tome, and packed full of wonderful, complicated, and in many cases witchypoems: poems which offer a refreshingly female voice and perspective from a period that tends to be dominated in what is considered the “canon” by male voices.

If you’ve never read any of her poetry, start with “Witch-Woman” reproduced below (public domain, don’t @ me). And then track down some more (maybe we’ll even throw a couple more of hers up here!).

Thighs and breasts I have loved;

Lips virgin to my thought,

Sweeter to me than red figs;

Lying tongue that I have cherished.

Is my heart wicked?

Are my eyes turned against too bright a

Do I dazzle, and fear what I cannot see?

It is grievous to lose the heart from the

Death which tears flesh from flesh is a

But death is cool and kind compared to

This horror which bleeds and kindles,

These kisses shot with poison,

Swift rider on the clashing clouds,

Mighty ruler of the souls of men,

Be merciless to me if I mistake this

As I will be merciless if I learn a bitter

I burn green oil to you,

I pour it upon the ground;

As it drips I invoke your clemency

Witches are the women of the false,

Maker of men and gods.

To-night when the full-bellied moon

Grant that I know.

Then will I offer you a beastly thing and

Or else the seed of both

To be your messengers and slaves forever,

And my daughters and theirs throughout

For your handmaidens and bedfellows as

How the white sword flickers!

How my body twists in the circle of my

Behold, I have loved this woman,

Even now I cry for her,

My legs shake and crumble.

Cord my sinews to withstand a testing.

Let me be as iron before this thing,

As flashing brass to see,

As lightning to fall;

As rain melting before sunshine it I have

The red flame takes the oil,

The blood of my trees is sucked into fire

As my blood is sucked into the fire of

your wrath and mercy,

Body touches body. How sweet the

spread of loosened bodies in the coil

of sleep, but a gold-black thread is

between them. An owl calls deep

Can you see through the night, woman,

that you stare so upon it? Man,

She stirs. Again the owl calling. She

rises. Foot after foot as a panther

treads, through the door—a minute

more and the fringes of her goat-

skin are brushing the bushes. She

pushes past brambles, the briars

catch little claws in her goat-skin.

And he who watches? As the tent-

lap flaps back, he leaps. The bearer

of the white sword leaps, and follows

her. Blur of moonshine before—

behind. He walks by the light of a

green-oil oath, and the full moon

floats above them both.

Seeded grass is a pool of grey. Ice-white,

cloud-white, frosted with the spray

of the sharp-edged moon. Croon—

croon—the wind in the feathered

tops of the grass. They pass—the

witch-white woman with the gold-

—and his eyes startle, and answer

the bow curve of her going up the hill.

The night is still, with the wind, and the

moon, and an owl calling.

On the sea side of a hill where the grass

lies tilted to a sheer drop down,

with the sea splash under as the

waves are thrown upon a tooth of

rock. Shock and shatter of a golden

track, and the black sucking back.

The draw of his breath is hard and

cold, the draw of the sea is a rustle

Behind a curl of granite stone the man

an obelisk, and her blue-black hair

has a serpent whisk as the wind lifts

it up and scatters it apart. Witch-

heart, are you gold or black? The

and her loosened hair is a thunder-

shower twisted across with lightnings

the woman. The undulating sea

fingers the rocks and winds stealthily

over them. She opens the goat-skin

The walls of the world are crashing down,

she is naked before the naked moon,

the Mother Moon, who sits in a

courtyard of emerald with six black

slaves before her feet. Six—and a

in the moonlight, flinging her arms

about the soft air, despairingly lift-

ing herself to her full height, strain-

ing tiptoe away from the slope of

ways faster upon the grass. Her

blue-black hair in the moon-haze

Sweet as branches of cedar, her

arms; fairer than heaped grain, her

legs; as grape clusters, her knees and

ankles; her back as white grapes with

She runs through him with the whipping

of young fire. The desire of her is

thongs and weeping. She is the green

oil to his red flame. He peers from

the curl of granite stone. He hears

the moan of the crawling sea, and

sees—as the goat-skin falls so the

And the triple Heaven-wall falls down,

and the Mother Moon on a ruby

throne is near as a bow-shot above

Goat-skin, here, flesh-skin there, a skele-

ton dancing in the moon-green air,

with a white, white skull and no

hair. Lovely as ribs on a smooth sand

ling a moor, long and narrow as

Winter reeds, the bones of the skel-

eton. The wind in the rusty grass

hums a humeral-chant sat to a jig.

igig in a crepitation of lust. The

waves are drums beating with

slacked guts. Inside the skeleton is

a gold heart striped with black, it

glitters through the clacking bones,

throwing an inverted halo round the

Scarlet is the ladder dropping from the

moon. Liquid is the ladder—like

water moving yet keeping its shape.

and its bones rattle; the rattle of the

bones is the crack of dead trees

bitten by frost. The wind is desolate,

and the sea moans.

But the ruby chair of Mother Moon

shudders, and quickens with a hard

fire. The skeleton has reached the

last rung. It melts and is absorbed

in the burning moon. The moon?

No moon, but a crimson rose afloat

black-tongued lily. A lily? No lily,

but a pruple orchid with dark, writh-

Trumpets mingle with the sea-drums,

scalding trumpets of brass, the wind-

hum changes to a wail of many

voices, the owl has cased calling.

“White sword are you thirsty?

I give you the green blood of my heart.

I give you her white flesh cast from her

The skins of my eyes have dropped,

With fire you have consumed the oil of

Some other man may need it.

She was sweeter than red figs,